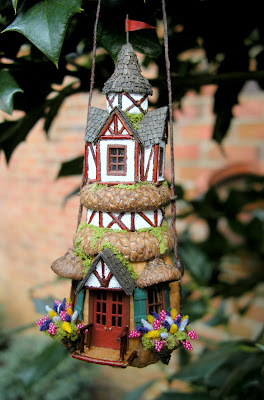 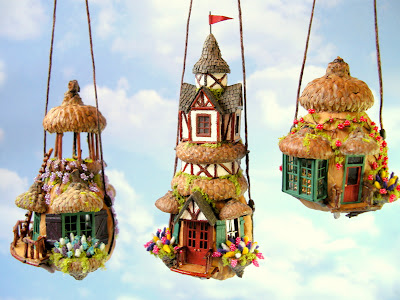 Some of you may remember that last year there was a meeting at Twigs & Berries. The residents were very upset because their new neighbor had built a house (Nuttycrest Cottage) which violated the strict building codes in their beloved tree. Sadly, despite the overwhelming number of votes, the homeowners were unsuccessful at having the cottage destroyed or relocated. Everyone suspected there were pay offs involved to the powers that be.

So... It was no surprise when this monstrosity (Sparrow Hop Cottage) appeared in the tree this week. Even Nuttycrest didn't go this far! It was only two stories. This cottage appears to be three, or is it four stories? Naturally the residents are once again, very upset! Everyone suspects the new neighbors may be outlanders.

The construction of this house took a lot longer. I used the the same materials, a walnut, acorn caps and twigs. Because the brittle twigs were going to need to conform to round shapes, I boiled some in water and clamped them over something round to dry. On the second story of the house all the "timbers" are twigs but the "daub" is opaque embossing powder used over glue. I had to fill those (daubed areas) several times to get them up to level with the twigs. Taking care not to get glue or powder on the timbers.
The second story roof with the four back to back dormers was a challenge. Partly because finished it is only 3/4 of an inch wide and because they all angle to the center. The shingles are made of paper. I tried several different ways to form the tower roof. In the end polymer clay proved to be the best result. 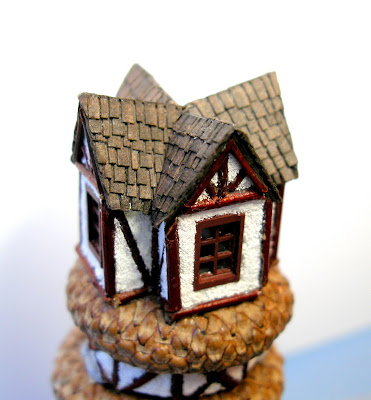