The Three Hares AKA Tinners Hares/Rabbits 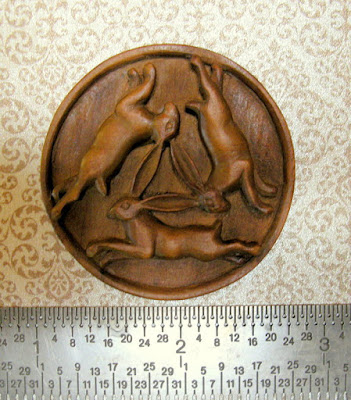 Happy Easter!
It has been close to two years since my last blog post. I just wanted to share one of my favorite historical and mystical images with you known as... The Three Hares. Sometimes called Tinners Hares/Rabbits.

It truly has a fascinating history. https://en.wikipedia.org/wiki/Three_hares I will leave the historical telling of it to those who have made a great effort to research it. https://hyperallergic.com/311482/the-mystery-of-the-three-hares-motif/ One of the earliest examples of the image is from the year 581 found in Buddhist cave in China. 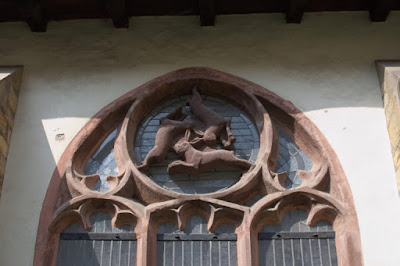 Many years ago I sent photos of it to Linda Master http://miraclechicken.blogspot.com/ asking her if she would be interested in carving it in miniature. We brain stormed it, thinking of how many ways it might be used in 1: 12 scale. I thought of pargeting it to the exterior of a cottage, she had several ideas of her own. There are as many uses in miniature as there ever have been in real life throughout the centuries. I can see it on garden walls, painted on porcelain tiles, sculpted terracotta tile, the list is endless but Linda's specialty is carving wood.

Recently we started talking about the image again. This week I received a 1:12 scale piece from her of it. It is 44 millimeters in diameter a little over an inch and a half.  I wanted it to look like it was  old, possibly an architectural salvage of some sort.  I couldn't have been more pleased with her rendition. She did an absolutely beautiful job. It was carved out of a special piece of pear she had been saving.

How I will use it remains to be seen. It needs just the right setting. I think it will fit in perfectly with the other things I have collected. The Three Hares would make a great name for a tea shop. 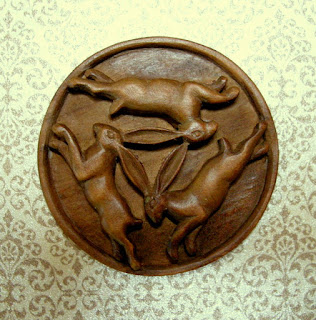 Mean time.... I am embroidering the hares it on a denim shirt, using a needle painting technique. I think 3 inches diameter is a good size for over the left breast pocket. What have you found to do while spending so much time at home during this quarantine? 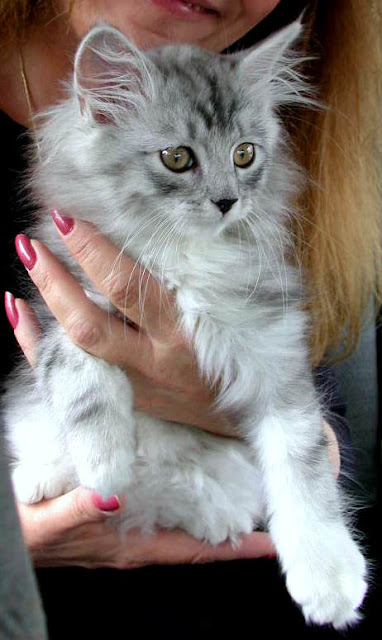 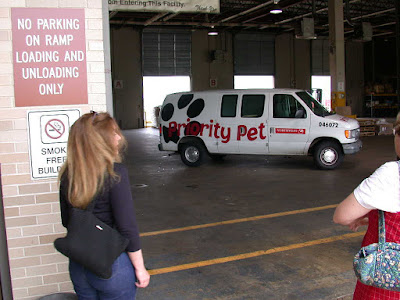 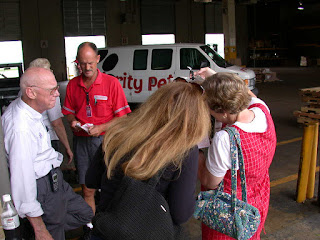 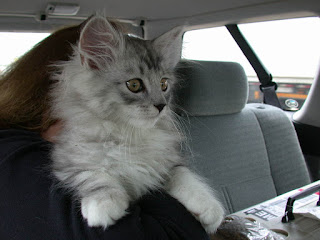 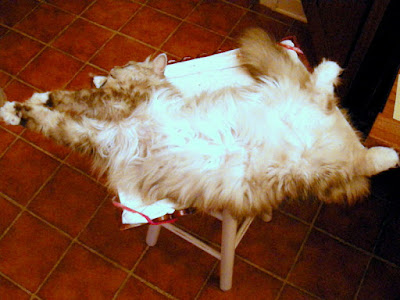 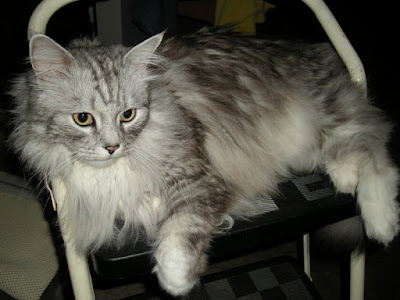 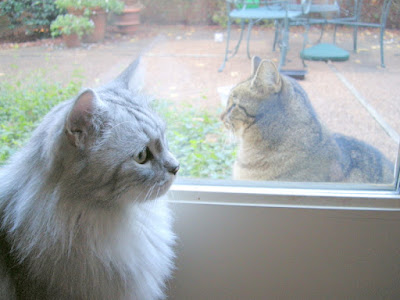 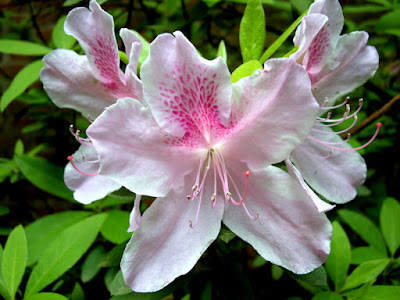 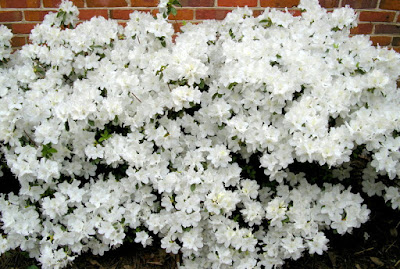 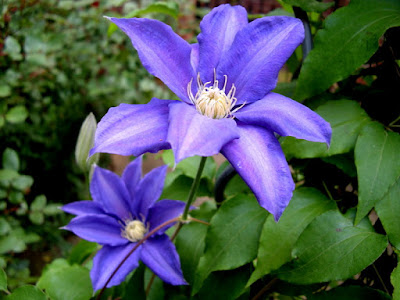 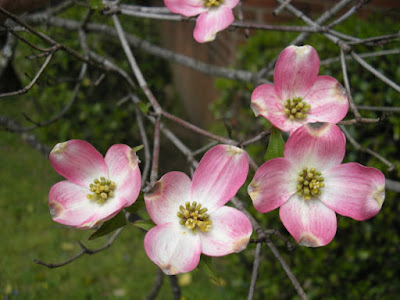 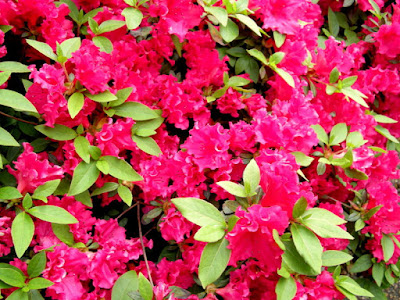 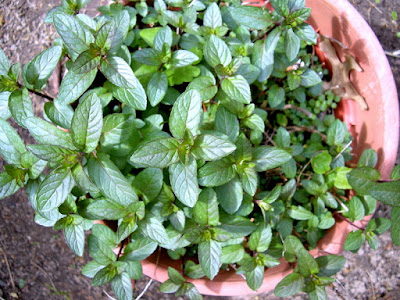 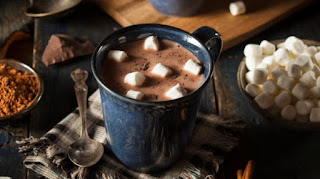 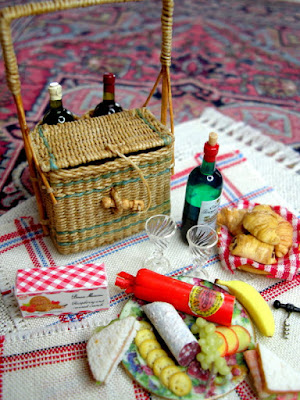 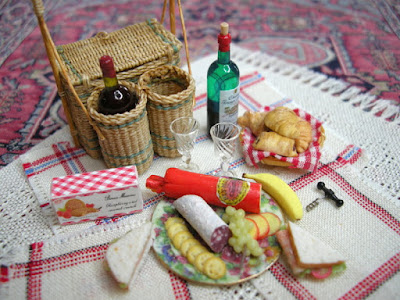 Last Spring when I was at the Tom Bishop Show in Chicago I met Lidi Stroud for the first time at her table. It was a real treat to see so many of her gorgeous baskets in person.  I was going to buy one of my favorites but instead we started talking about a trade. Lidi told me she liked my walnut shell cottages. Over the next few months a trade was never discussed again.

In November I emailed Lidi to let her know I had sent her a parcel. She wrote back and said... "Now isn't that strange, I sent you one yesterday." Strange indeed!!! I was sure she had forgotten all about our discussion.

I was thrilled to bits when her French picnic basket arrived! It has been a favorite since the first time I saw it on her blog. http://basketcase-miniatures.blogspot.com/ You can't really appreciate how fine her work is until you hold it in your hand. 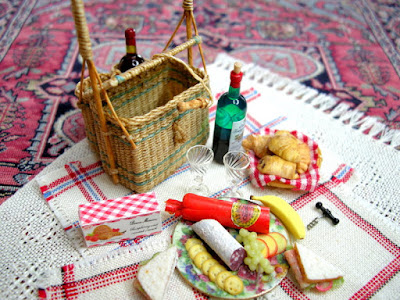 My neighbors asked me if I would collect their mail and parcels while they were out of town. Sadly the people who sent them these lovely flowers didn't know they were leaving for a 10 days.

They sure look nice in my dining room. The colors are perfect! 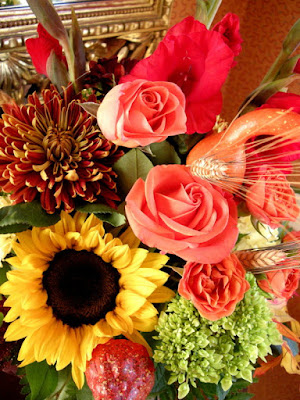 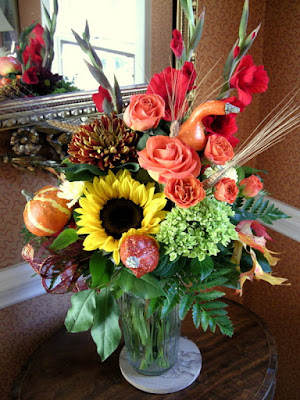 Happy Thanksgiving to all who are celebrating today!
Posted by Catherine at 1:06 AM 12 comments: 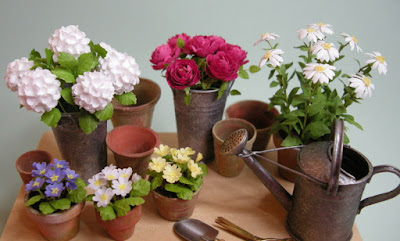 As you can see I have been busy.
There are a few things I would rather do then make flowers. Like spend the day with my tax man or go for a colonoscopy. The entire time I kept thinking of dear Elizabeth making that garden all around her house. How did you survive that I wondered?  http://studioeminiatures.blogspot.com/  I survived by listening to one of the Outlander audio books. Good thing it has 47 disks!
Still, I have to admit miniature flowers have loads of charm. I am going to have to work on the color combinations.  I wanted some sort of setting for the French flower buckets, watering cans I made. I am hoping to start making those to sell next year. And yes... this project will have walls. ;-O 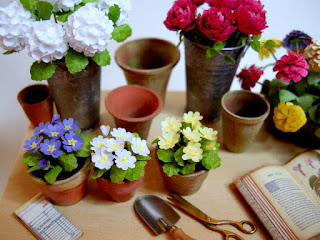 I think a cat popping out of a bigger flower pot might be fun next. 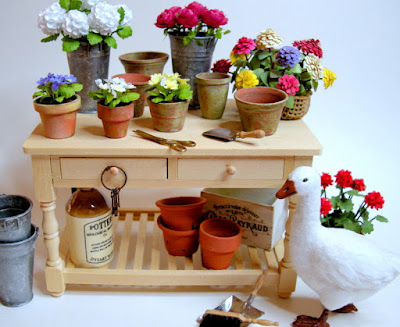 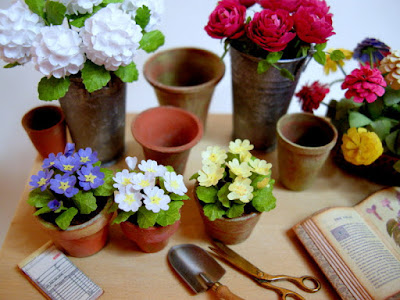