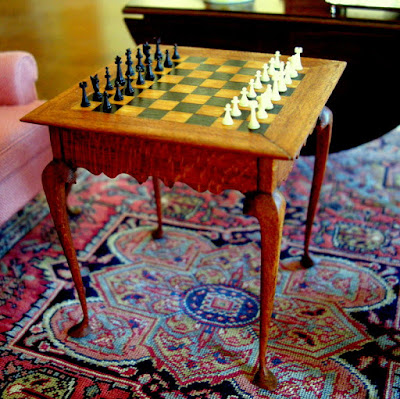 I am afraid until the sun comes back out these are going to be the best photos I can get. It has rained every day for a week. Not that we are having the horrible flooding that those in the UK are experiencing. I have been thinking about all my blog friends there hoping they are safe. 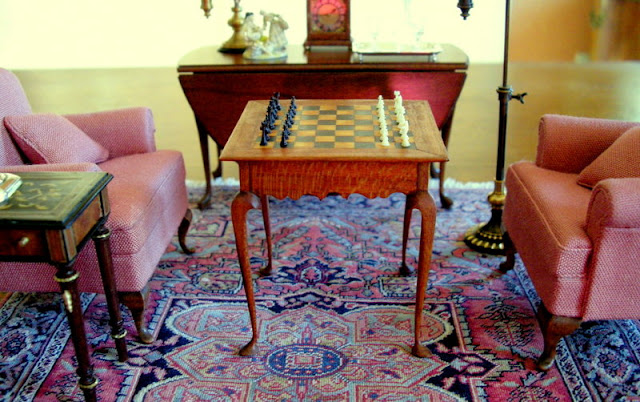 
Occasionally you can find a great deal on eBay. This one blew me away because when I accidentally found it there weren't any bids and only one day left in the auction. Surely it had been up there for at least a week. The starting price was very low. Sadly for the seller, she had misspelled Don Buttfield's name in the title. So perhaps anyone who searches for his work would not have been notified. I really can't figure out any other reasonable explanation for the lack of bidders. Plus, you never see his work for sale on eBay. Actually, this is the first time I have seen anything of his for sale at all.


For those who do not know. Don Buttfield (now deceased) was a well known master miniature furniture builder/maker. IGMA http://www.igma.org/ has an award named after him. He was one of their founders.

I first saw his work in a book by Virginia Merrill and Thelma R. Newman called The Complete Book of Making Miniatures for Room Settings and Doll houses, Crown, 1975. That book was what caused me to fall in love with miniatures. It was my first exposure to truly fine collectible pieces.

I was excited but somewhat wary about the auction so I called William Robertson to ask him what he thought of the piece and ask him what he thought it was worth. He and I watched the count down as I won the bid I made the day before and for much less than half of what it is worth. I was so shocked someone wasn't out there waiting in the wings to snag it from me in the last few minutes/seconds.
How fun is that! So my nasty 2015 can now go out of my life on a good note!

The body of the table is made of cherry. The chess pieces are made of ebony and ivory. So tiny I cannot imagine how he made them. I am not entirely sure what the squares inlayed in the table are. The legs get so thin it is very scary to handle the table. The woman who owned it kept it in a box for 38 years! 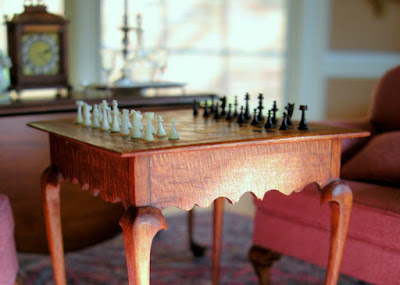 This is one of the wood boxes that Don made for the table. I received two wood ones. 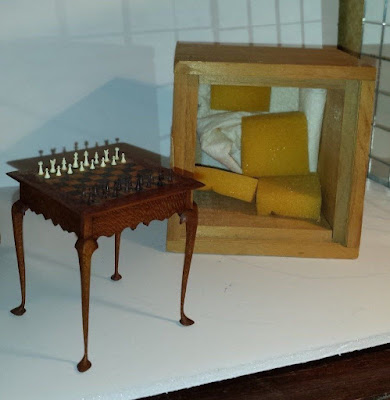 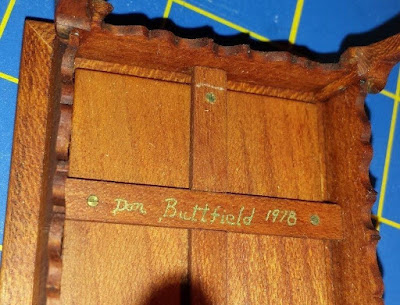 It never goes the way you think it will. 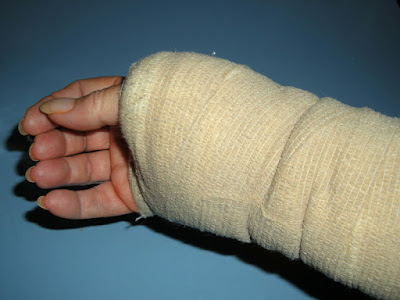 Yesterday I had my right hand operated on. Yes, I am right handed. So there won't be any miniature making around here for a few weeks.

Something that I thought was going to be relatively simple. A little bandage and a few days to get the sutures out. OOPS! I have two more weeks wearing this. My hand looks like Donald Trump's face or like someone powdered it with Cheeto's dust. The result of having it painted with betadine before they operated. I have tried baby wipes, alcohol and peroxide.. Nothing gets that stuff off.

Another thing I wasn't expecting was to come home with a giant block of Swiss Cheese to wear on my arm. It does help with holding the ice bag though. 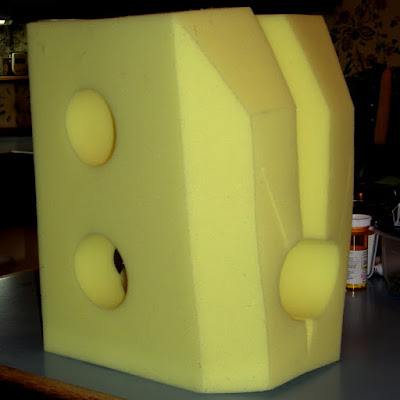 I want to wish all of you a very Merry Christmas!
Posted by Catherine at 5:48 PM 51 comments: