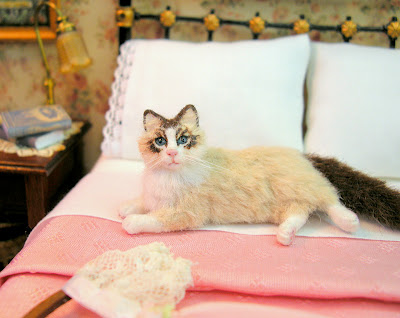 This poor kitty has had more facial reconstruction than Joan Rivers!

I finished it and the next day I decided I hated the angle of the fur so I ripped it all off (below the eyes). Then I reapplied the fur at an angle I liked better. A day later... I decided to dye areas around the face to give it some stripes. At first this cat had sort of a dark brown widows peak. I woke up the next day and decided I hated that look, so I changed it to a longer strip of white to the forehead. PHEW!... That is a lot of surgery on one cats face! I forgot to say...After the final cure bake, I didn't like the angle of the head so I cut it off and changed the sculpt of the shoulders to accommodate the new head position.
. 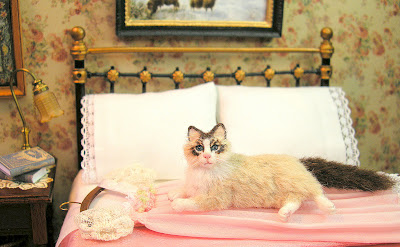 Hey! Get off that nightgown! Leave it to a cat, they are connoisseurs of comfort.

I have read you cannot add or change anything to a furred miniature animal once it is finished.  Maybe those people don't have a 10X  jewelers eye piece. With that I can see more then anyone ever wanted to know about something they made.

This cat was furred with Alpaca fiber over my polymer clay sculpt. She has blue 2mm agate bead eyes. I started with a wire amateur so the tail can be repositioned. Not often because eventually the wire would work harden and break. She also has sculpted pink paw pads like the other cat I made. 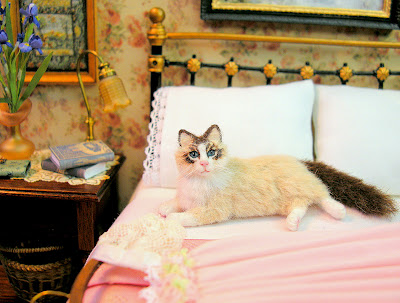 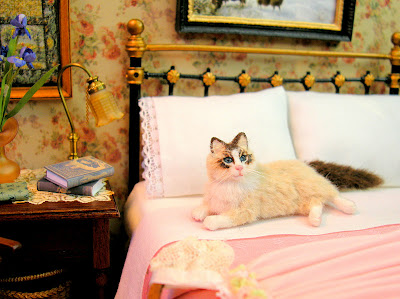 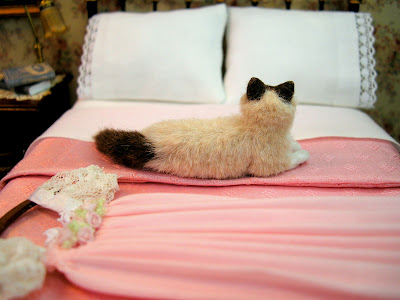