A Narrow Escape From Another Disaster A week ago I received the chest I ordered from Chris Malcolmson. I couldn't be more delighted!!! http://www.chrismalcomsonminiatures.com/

The first chest he sent me was damaged during shipping. It was disappointing and I really thought it would be taller than two inches. There was nothing on his site in the way of measurements, I just assumed it was a bigger piece. It had to be returned in any case.

This new chest turned into a special order. I asked him for a taller one which meant he had to add more drawers. His marquetry designs are beautiful, as is the burl wood he used for the main body of the chest. I was very surprised to see that he dovetailed all the drawers this time. That was not something I expected because the first chest didn't have them. 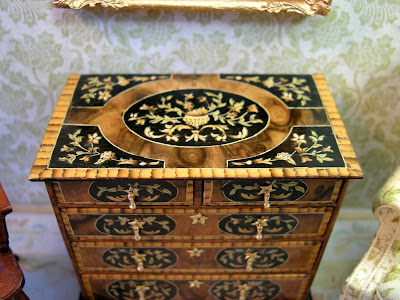 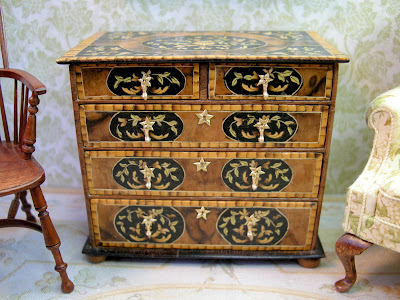 I wrote to Chris immediately to let him know the chest arrived safely and thank him for the BEAUTIFUL job he did.  When he wrote back this morning he said he hoped I had not thrown the box away because he also sent me a gift. He told me it was an apology for the long delay. He had to have his saw repaired which took a few weeks.

I gasped because I had thrown out several boxes in the garage last night and I knew the city had already been here to pick up everything. When I got to the garage there was his (over looked) box with all the packing materials still inside it. He made me a gorgeous tea caddy. I am thrilled, it is just beautiful. I wrote him back to thank him once again.
I love happy endings!!! 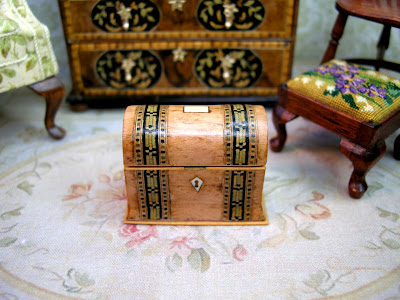 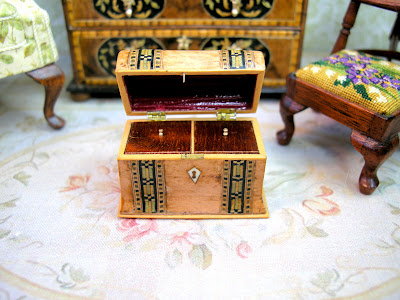